I held my replica of Christine Forster’s* vocal tract and pushed air through the hollow of its unique undulations, before I saw her face on a video call.  When she spoke the words ‘Bahn’ (A), ‘Beet’ (E), ‘mit’ (I), ‘Offen’ (O) and ‘Butter’ (U), lying rigid in an MRI machine, a part of her was transformed into a speaking machine.

This sculptural, multi-channel sound installation explores the unease and unaddressed intimacy of speaking in an alien voice. Using AI-generated voices  in various stages of development modelled on Sebes and Forster, it challenges the asymmetric power relationships which paradigmatically exist between the silent, disassociated operator of a vocal synthesizer and the voice it produces.  Mouthpiece delves into the fleshy and personal relation of holding another human’s throat in your hands, of assuming their identity, of wearing the skin of their voice.

*name has been changed 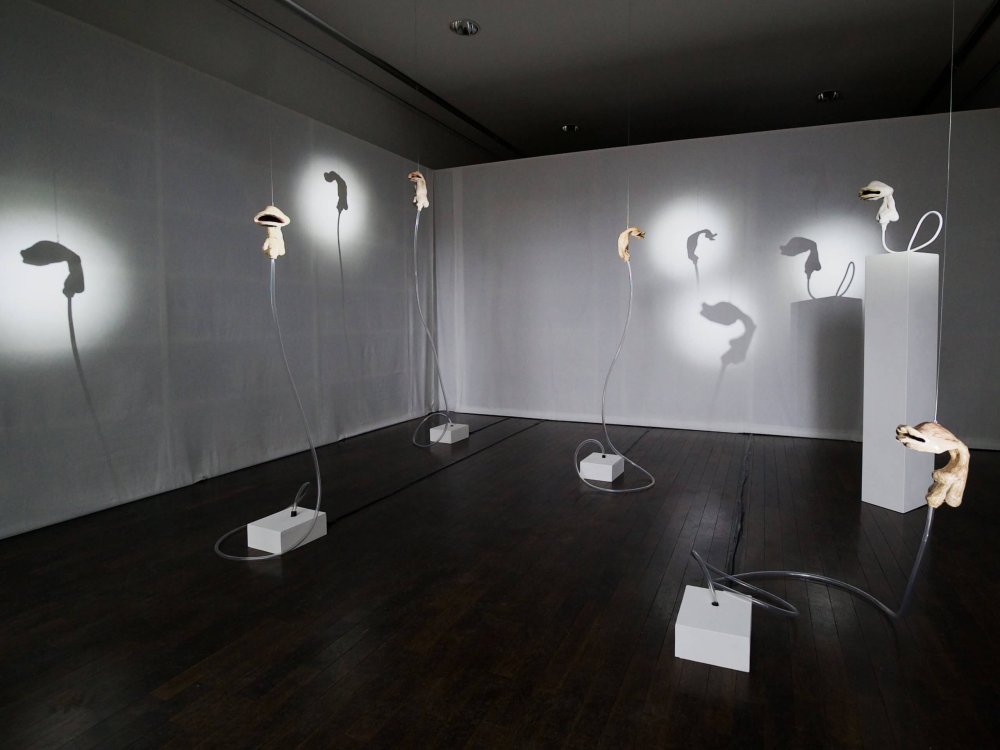 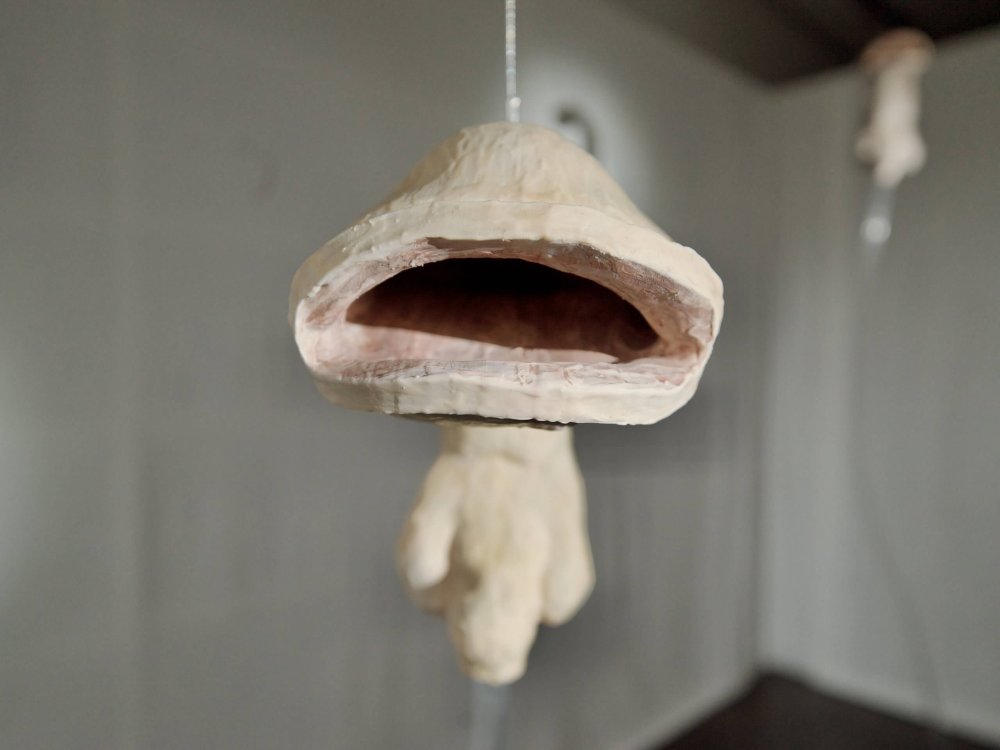 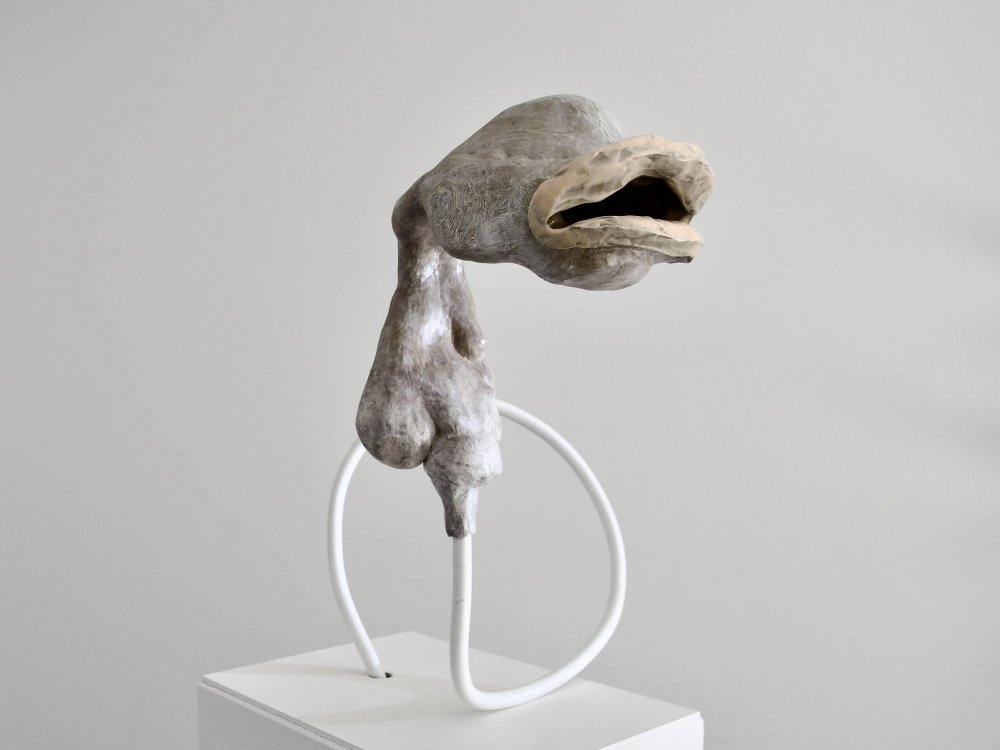 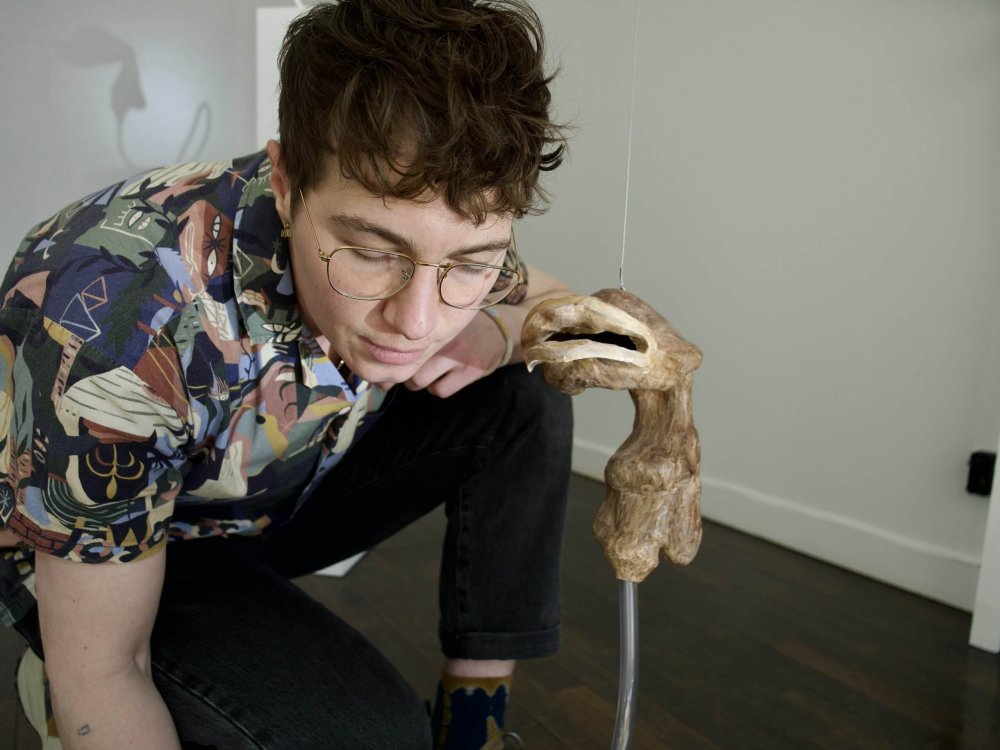 Mouthpiece was exhibited at the Collegium Hungaricum Berlin from May 26-29, 2022, as part of the Sound Studies and Sonic Arts Master Exhibition of the Universität der Künste Berlin.

It consists of five sculptural elements, each approximately twenty centimetres in height, which act as acoustic filters for a spatial composition. These objects are 3D printed models of a woman’s throat, taken from MRI scans of her vocal tract engaged in the production of five German vowel sounds. Their exteriors have been melted or coated in layers of latex and paint to create organic and skin-like textures. Suspended at various ear-heights, their biological forms each have a unique mouth-like orifice, either gaping open or with pursed lips, and an undulating hollow passageway which bends to meet a clear plastic hose, curtained at the top by two testicle-like sacks, which winds downwards to the floor and connects each object to a minimalist white box. Inside, a talk box propels an audio signal through each of the hoses to resonate in the chamber above. One object has a higher pedestal – the tube protruding from its base is a white-coated metal conduit, which curves in a circular form until it meets a white plinth below.

The sounds emanating from these uncanny objects are at once digital and vocal and seem to be in conversation with each other across the room. Moments of silence are punctured with fragments of human timbre or the cracks of glitchy bites of sound. These interrupt and intersect with drones which may either ring out over the course of a human breath or continue in an impossibly extended phoneme-loop, with the perfect repetitions of this cycle generating a rhythm over time. These sounds used to create the composition come from a range of sources, the primary one being a recurrent neural network (RNN) for sound synthesis called ‘PRiSM Sample RNN’. This is a computer-assisted composition tool which uses artificial intelligence to generate new audio outputs by ‘learning’ the characteristics of an existing corpus of sound or music. In this case, Sample RNN was trained on two voices, my own and the voice of Christine, to create a kind of mixture, or a child of our two voices. I also consciously used generations from the model which were from earlier stages of training, so that the likeness to the human voice was not yet well rendered, but rather in an underdeveloped stage of the system learning how to sound ‘natural’. This produced what might be described as a ’digital’ or ‘glitchy’ timbre, with fragments of a more natural sounding vocal quality still faintly perceptible. As a result, the traces of three agencies are present in these sounds – mine, Christine’s and the machine’s. The chattering and droning characters seem to be in dialogue with one another, and as visitors enter the space, their movements determine the unique mix of sounds their hear in this conversation.

This work is an experiment nestled in the thorny complexity of the social, cultural and political ramifications of vocal synthesis. It plays with a kind of ventriloquial identity that is not glossed over, exploited, or capitalised on, but which is but which is strange and vulnerable speculation, a fragile, pieced-together vocal skin made up of several selves. 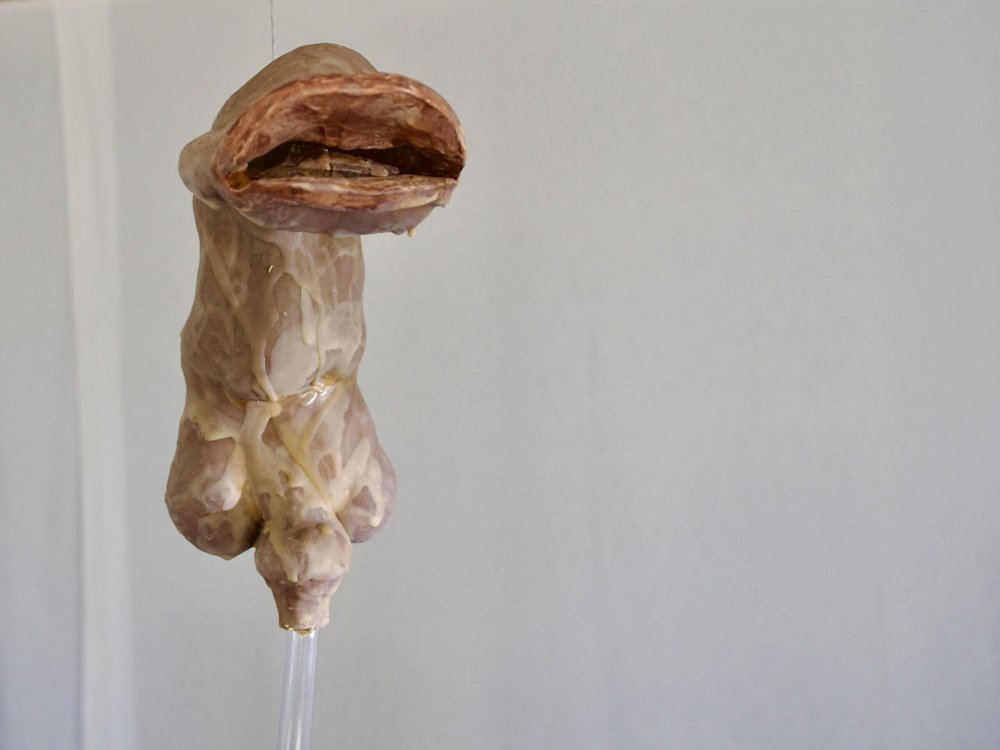 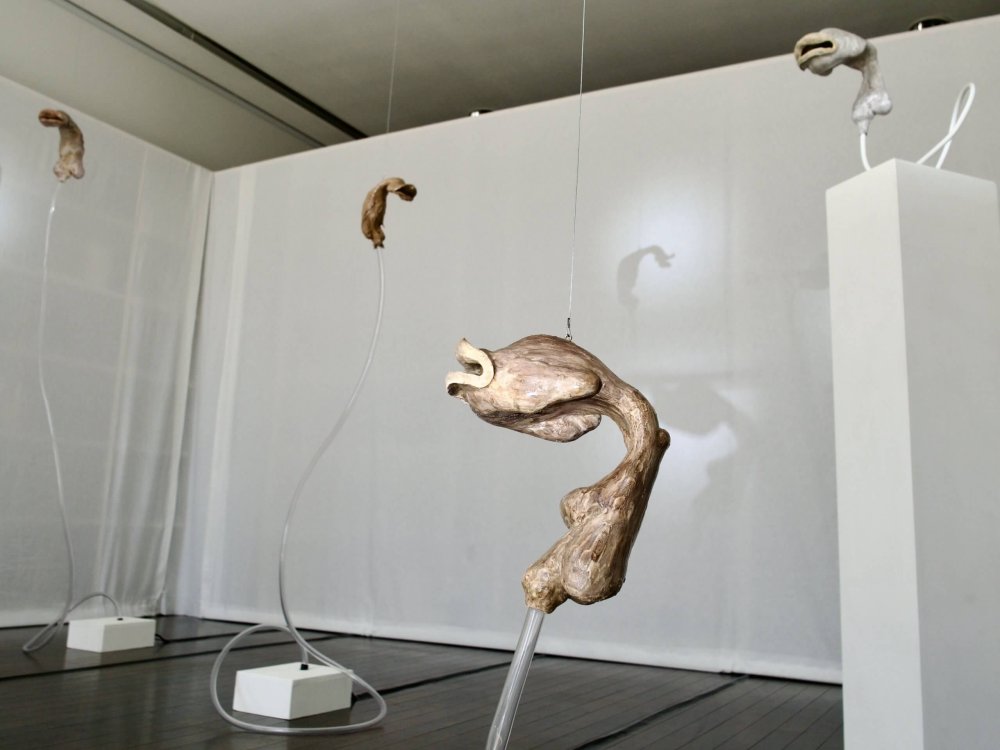 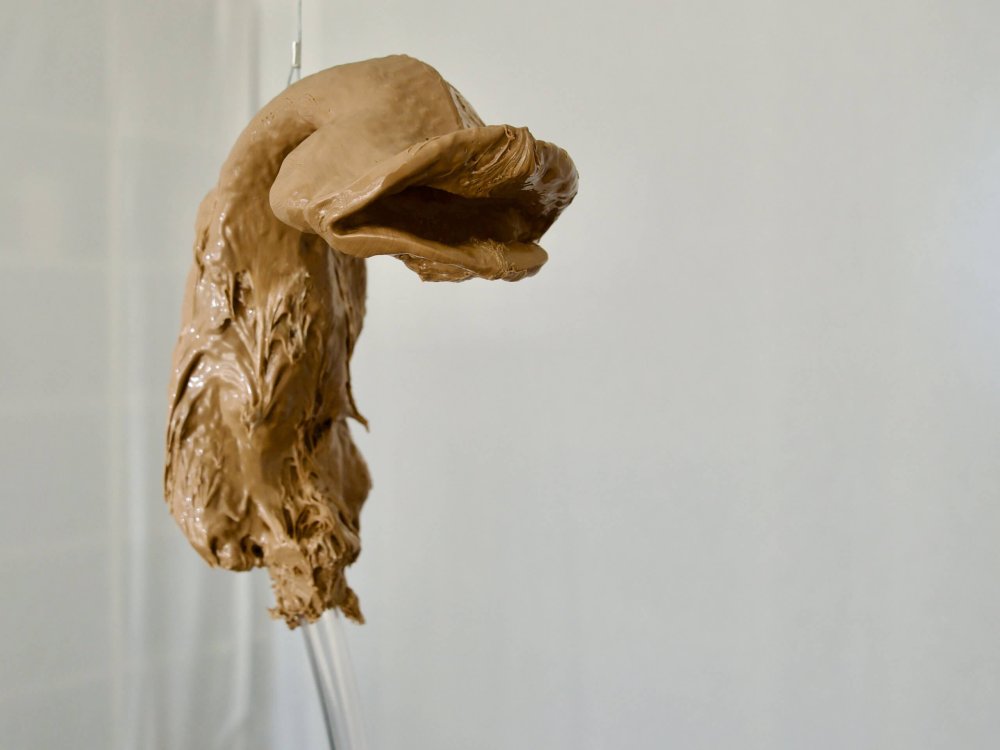