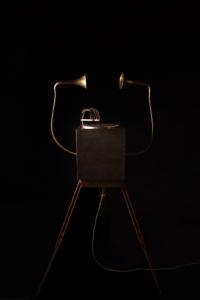 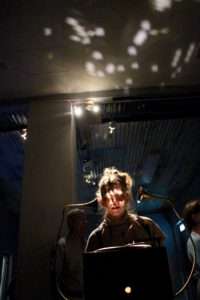 The Echoscope is a participatory sculpture made of wood, brass, electronic components and media artefacts. This apparatus plays a 19th Century Symphonium music box disk, bypassing the intended reading of the the medium in favour of a imaginative digital reinterpretation.

As the disk spins, its visual information is transcoded into sound. Light is projected through holes in the disk towards light sensors in the tone arm above, triggering sounds to play and stop according the pattern of holes on the disk. The sounds produced by the Echoscope include experimental archival recordings produced at the Volta Laboratory in Washington DC in the 1880s. These are combined in real time with the artist’s own mimetic responses, which have been primitively recorded onto paper disks prior to their digitisation. The mechanical noise of both the old and new recordings gradually accumulates to mask the sound of the voices. They seem to yell across the vast valley of time that stretches between the recordings’ original creation and their resurrection.

The cacophony of voices and noise produced by the Echoscope is projected through two flexible metal arms which support acoustic horns, angled toward one another at head-height so that the viewer can stand between them for an individual, immersive and increasingly claustrophobic experience of stereo sound. Internally, a Raspberry Pi computer, motor, LED lighting, amplifier, and speakers, determine the Echoscope’s combination of sounds. Polished timbers and tarnished brass form the outside of the body, supported by tripod legs from a portable French easel. Despite these material allusions to the nineteenth century, the viewer is not shielded from the instrument’s electronic functioning. The light sensors’ copper wires are exposed and small round viewing window in the body allows the viewer a glimpse of the tangle of wires and equipment inside.

Image credits (above and below): Isobel Markus Dunworth, Lottie Sebes and Robert Sebes. Video produced and edited by Lottie Sebes